Karyne Levy’s article “Second Life Has Devolved Into A Post-Apocalyptic Virtual World, And The Weirdest Thing Is How Many People Still Use It” for Business Insider reminded me of James Thurber’s fable “The Sheep in Wolf’s Clothing“, whose moral was “don’t get it right, just get it written.” While this article has already been thoroughly lambasted for various reasons (some of which miss the point entirely) by various SL bloggers, prominent or not, I think it warrants some attention and close examination. 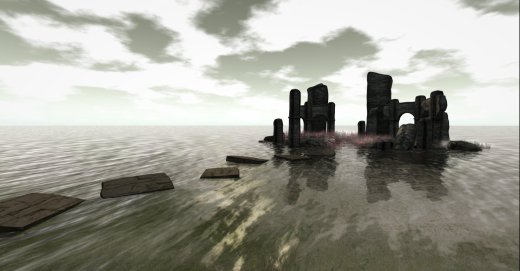 Beautiful regions like Kaelyn Alecto’s (now sadly closed) “It All Starts With A Smile” are not spoken of in Mrs. Karyne Levy’s article for Business Insider. Click on the image for full-size version.

To cut a long story short, Mrs. Levy decided to write about Second Life and so she created a new account (her first one was when SL was launched), logged in and spent some time there. After spending some time in the beginners’ areas and trying to make sense of the viewer, she went to a Game of Thrones-themed region, where she was shunned by everyone (being a “n00b” and all). After this, she went to Caledon Oxbridge, where she hung out with an oldbie who gave her a view of SL that corresponded to her own personal experience and understanding of the platform. This view consisted of clubbing, a few words about the existence of a virtual sex industry (Shock Horror), the fact that people in SL do flirt (Shock Horror II), that some of them even hit it off in RL (Shock Horror III: The Revenge, complete with deleted scenes from all three instalments of the trilogy), a few words about the virtual economy and the in-world content creation tools.

At any rate, the input you’ll get on any given topic depends on the persons you ask about it, and what you write about a certain topic depends on the research you do about it. And this is where the article shows some weaknesses that bring Thurber’s fable to mind. First of all, there was very little research as to what has been done so far with Second Life; just mention of a negative comment on the (blatantly prejudiced) MetaReality Podcast; there was passing mention of the corporations that came and went during the overhype period when LL, under the leadership of the very shrewd and charismatic Philip Rosedale, indulged in a corporate pipe dream. There was passing mention of academic presence in-world. 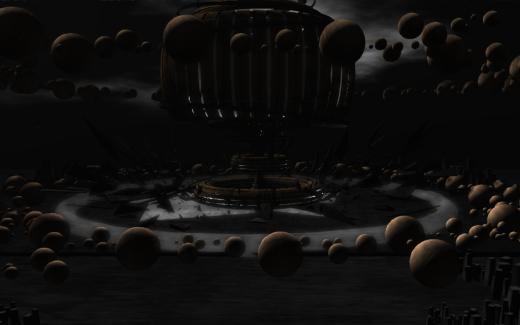 Kicca Igaly and Nessuno Myoo’s Danger in Evolution LEA exhibit. Art was not mentioned in Mrs. Levy’s article for Business Insider. Click on the image for full-size version.

Second, there was no mention whatsoever of institutions like the Linden Endowment for the Arts (LEA). There was no mention whatsoever of any artistic work that is presented in-world – from impromptu live music shows to the incredibly ambitious (for SL’s known technical limitations) Paradise Lost in Second Life, and from galleries to virtual museums, all of those things were absent. Also absent was any mention of the beautiful in-world destinations that attract so many visitors every day. Or what about the very carefully designed in-world portrayals of RL cities (see the 1920s Berlin Project) and natural beauties? Calas Galadhon, with its gorgeous regions? No mention of them at all. None of these things were mentioned. It was like they didn’t exist at all; as a matter of fact, I don’t see Mrs. Levy’s guide mentioning any of these things to her, and this helped establish a very limited and narrow view of Second Life in Mrs. Levy’s mind. Given the image that was etched in her mind, was the title of her article a surprise? I think not.

Then again, Mrs. Levy had only a few hours to spend on SL, or maybe she had decided she’d only spend a few hours on it (after all, she had given SL a quick go many years ago, and had decided it wasn’t for her, so I believe there were some preconceptions in her mind from that previous stint). The very short time Mrs. Levy spent in-world in order to write this article is exactly where another similarity with Thurber’s fable becomes apparent; like the competitive sheep spies in the fable, she ended up publishing yet another run-of-the-mill article of the “My Five Hours In SecondLifeLand” type, which represents only a small part of what people do with(in) SL.

Cica Ghost’s “Little Village” exhibit from March 2014. Another sample of in-world art that never made it to mainstream media coverage of Second Life. Click on the image for full-size version.

In all fairness though, there are aspects of this article that we should think about, and they have to do with the new user experience, along with the retention of new users. As pointed out in former Linden Lab CEO Rod Humble’s interview with Inara Pey, Second Life’s new user retention is a rather paltry 20%. Numerous people register, give it a try and then just quit. Their experience of Second Life is, whether we like it or not, very similar to what Mrs. Levy described:

A crowded beginners’ area, and from then on… What? She visited a Game of Thrones-themed region. She said “hi”, but no one bothered to talk to her. Maybe because she wasn’t dressed according to the region’s theme? Maybe because people looked at her profile and said “sod it, she’s a n00b”? The reasons are irrelevant. What matters is that, at exactly that stage, most newcomers to Second Life log off and don’t come back. There is prejudice against beginners in SL, and people who have already been using the platform aren’t always  known for their friendliness and patience with beginners who are trying to get to grips with an unfamiliar UI and with notions they have never encountered before. 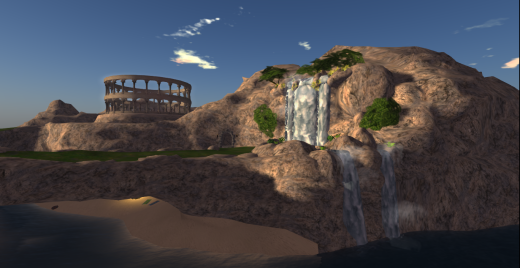 One of SL’s “Social Islands”. Are they really the best introduction to this virtual world? Click on the image for full-size version.

I’ll give her due credit. She persevered. Rather than say “sod it, I’m outta here” and quit, she found Caledon Oxbridge and went there. She actually did meet someone there. And that’s the person that bothered to show Mrs. Levy around. Yes, that person was not a Caledon Oxbridge mentor, that’s true. Yes, the picture she gave Mrs. Levy was very limited. But that’s what most of us see of SL for far too long; our view of SL is very limited, but this view is shared by many people. When we open the “Search” floater, we’re immediately hit by the classifieds that have been paid for the most, and these may not interest us at all. Following up from this, was Mrs. Levy helped in any way to see the diversity of what can be done and enjoyed in SL? No. Did she look for any different content? I don’t know. Can she be blamed for the fact that she didn’t see anything else? It depends; if she was just an ordinary beginner, I wouldn’t blame her. Beginners just look around and try to find something that attracts their attention. She’s a journalist, though, and her prior research, as is evident from her article, was scant. She could certainly have found more information, and she could have asked several of the better SL bloggers for help with her article.

Then again, without these failings in her reportage work, would we have a chance to see how SL itself fails to provide attractive guidance to beginners, make interesting content accessible, and how SL’s “community” fails to make newcomers feel welcome? That said, while Mrs. Levy’s article should perhaps have been titled “My Five Hours in SecondLifeLand” and certainly can’t win any prizes for insight on how SL has evolved over the years or how its creative potential has been harnessed by its users, it shows us in an extremely “in your face” manner what a beginner’s first hours in Second Life are like, which should act as a sobering reminder for both us and the Lab.

12 thoughts on “The sheep in virtual wolf’s clothing”

Of false rumours and CMS conundrums