The successful crowdfunding campaign for the Oculus Rift, which led to Oculus VR’s acquisition by Facebook in March (which I have covered here), brought virtual reality back to the media’s spotlight. Suddenly, everybody discovered the immense potential offered by VR, but the discussion has been focused mostly on the devices and not on VR itself. This can easily lead to confusion. In fact, it already has.

The Oculus Rift. Is it a device for VR applications or is it VR itself? Image: Paste Magazine

Wikipedia to the rescue once again…

So, to focus on the important bits: VR is defined as a computer-simulated environment, in which one’s physical presence in real or imagined worlds is simulated. In other worlds, virtual reality is a place; a setting. The Wikipedia article also adds (emphases mine):

Most current virtual reality environments are primarily visual experiences, displayed either on a computer screen or through special stereoscopic displays, but some simulations include additional sensory information, such as sound through speakers or headphones. Some advanced, haptic systems now include tactile information, generally known as force feedback in medical, gaming and military applications.

The overhyping of VR-related input (Leap Motion, Razer Hydra, Thalmic Myo) and output (Oculus Rift, etc) devices has given rise to a misconception in the VR-related discourse, which has become all too common. The misconception is that virtual worlds (like Active Worlds, Second Life, World of Warcraft, Everquest, Elder Scrolls, OpenSim grids, etc) are not VR, and that VR is something else, which will become available only to the lucky owners of VR headsets like the Rift and gesture controllers like the Razer Hydra. Another, less common, variant of this misconception says that it’s the devices that are VR, and not the simulated environments, or that simulated environments are not VR unless these heavily-promoted devices are required for their use. 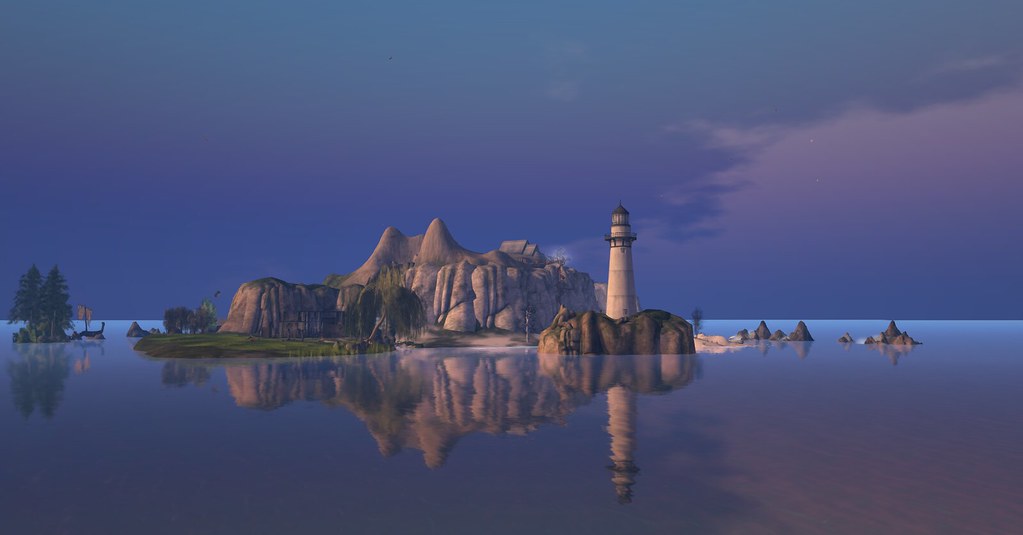 Bine Rodenberger’s lovely Biminist (back in September 2013; now it has been renamed Binemist at Mystical Falls). A wonderful computer-simulated environment, where a visitor’s physical presence is simulated. According to some recent pundits, though, it’s not VR; neither is the technological platform (Second Life) that enables its creation.

No. Virtual worlds are virtual reality. They are computer-simulated environments where one’s physical presence in a world (real or imagined) is simulated. They are textbook examples of VR applications. The fact that the typical input devices for them are the humble keyboard and mouse, with the “traditional” display monitor being the typical output device, means nothing at all. What matters is what these worlds do: They simulate one’s physical presence in a real or imagined world. And, as far as I’m concerned, many of these virtual worlds are quite successful at what they’re supposed to do. On the other hand, the devices mentioned above are just that: input and output devices. Their use will be beneficial or even crucial for many VR applications, but they are not the definition of VR.

On a closing note, I’d like to offer a question. What the Oculus Rift (which is still not on the market, unless I’m mistaken) might be in five years from now valued Oculus VR at $2 billion. Leaving mega-franchises like WoW and Everquest aside, I want to turn our attention to Second Life and other such free-form virtual worlds, with their wild diversity, the creative freedom they give their users, and their in-world economies. They’re already here, and they’re actually doing quite well, despite the doomsaying. Shouldn’t they be worth a lot more than a company that’s yet to put its product on the market?

A deluge of (unwanted) notecards and updates

Revisiting the Sea of Cubic Dreams...