On Saturday, September 13th and at 14:00 SLT, the first episode of Virtually News with AvaJean Westland will premiere at the LEA Theater, as well as on YouTube, SLartist, and Vimeo. 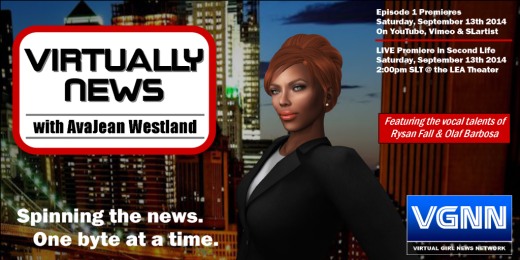 Virtually News with AvaJean Westland is a mock/spoof news machinima created by actress/writer Gameela Wright (AvaJean Westland in Second Life). Its style follows that of The Onion News Network and SNL’s Weekend Update, and is described as an irreverent take on current events and pop culture, which pushes the boundaries while using animation as the filter. 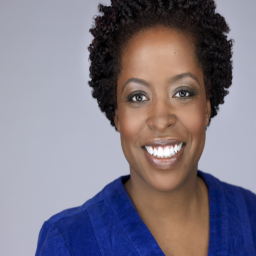 Gameela Wright is a New York-based actress and writer, with over 15 years of experience in theatre, commercials, television, voice overs and film. She has appeared in several highly successful TV series, such as Blue Bloods, Law & Order (all three series, including Criminal Intent and Special Victims Unit), and Orange Is The New Black; other TV series she has appeared in include The Blacklist and Members Only.

As AvaJean Westland in Second Life, she performs live theater with the Avatar Repertory Theater Company (ART), and she has also worked as a voice actor and avatar puppeteer for the highly-acclaimed film noir machinima series The Blackened Mirror, where she played the role of Martha Pearse and controlled the avatars of several characters whose voice actors could not be in-world for the filming. 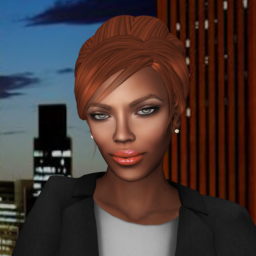 She is also the founder and driving force behind Virtual Girl Productions and has collaborated with Suzy Yue of Running Lady Studios on machinima projects such as The Twilight Sim and Name That Schmuck! Furthermore, she has she has worked with Chantal Harvey, Island Rain Studios, and Alfonso Kohn, and has created machinima for the Project Homeless campaign (The Quiet Dark Wind) and SciFi Film Festival (Centuries Past) in conjunction with Screen My Shorts and The University of Western Australia (UWA). Centuries Past won two awards.

Ms. Wright hopes to use machinima as way to bridge real and second life and to help cement machinima as a form of animation that appeals to all.

As said in the beginning of this piece, Virtually News with AvaJean Westland will premiere this Saturday (9/13/2014) at 14:00 SLT at the LEA Theater. Dress is upscale casual or formal, and attendees are requested to keep their script count and the complexity of their attire low. Also, you are encouraged to arrive at the venue early to secure a seat and give textures and objects enough time to rez.

One thought on “Virtually News with AvaJean Westland”

Revisiting the Sea of Cubic Dreams...

A Room for Ferrisquito: The early works of Bryn Oh