Hippie Bowman is a well-known regular of the Second Life feeds, and a pivotal member of SL’s community. He’s known for running the Lagrange Point Spaceport region, where he hosts parties, breakfasts and building classes. Last night, SL photographer and artist Owl Dragonash invited me to the opening of her and Daallee’s new gallery named the Living Room, which can be found at the Lagrange Point Spaceport.

Cica Ghost’s Small Worlds exhibit at the Living Room. Please click on the picture for the full-size version.

As they state in their accompanying notecard, they wanted a little comfy place for awhile, a place to give back to Musicians and Artists they love and appreciate. So, they made a welcoming hangout for their beloved artists and musicians and other members of SL’s community. The gallery opens tomorrow, March 3rd, at 12PM, with an exhibit of Cica Ghost’s cute vignettes titled “Small Worlds”, which will be running for the entire month. DJ duties at the opening party will be covered by the Vinnie Show.

END_OF_DOCUMENT_TOKEN_TO_BE_REPLACED

Last Friday, I was invited to preview Canary “Becky” Beck’s exhibition of self-portraits titled Ne Me Quitte Pas, which opens on Thursday, November 20th, 2014 at 12PM SLT and will be hosted in the attic space of the Arts & Culture Community (A&CC) until January 10th, 2015. To get to the exhibit, you will need to enter the gallery after you arrive and go all the way upstairs.

Canary Beck is no stranger to the artistic circles of Second Life, most notably because of her activity with the Basilique Performing Arts Company and their (until now) magnum opus, Paradise Lost in Second Life. This time, she debuts as an in-world photographer, with a collection of twenty intimate and very powerful self-portraits tied to lyrics from Jacques Brel’s 1959 hit Ne Me Quitte Pas (Do Not Leave Me), which has been covered numerous times in various languages; English speakers are likely to be more familiar with its adaptation titled If You Go Away, with lyrics by Rod McKuen; personally, I find the English lyrics lack the emotional impact of Brel’s poetry, which I can only describe as an exercise in despair.

At this point, it would be best to let Becky’s words describe the exhibit:

In this series of pictures called “Ne Me Quitte Pas”, I have aimed to express what I am only now able to express coherently in words. I’ve even lifted the titles for the pictures from the verses of Jacques Brel’s plaintive poetry set to music, feeling unable to write them myself.

These very personal pictures are the result of two months of taking hundreds of similar pictures on my bare white platform – most of which I obliterated soon after I took them. I never planned to share them. As I’ve reviewed these works for showing; however, I see them now like heavy pages in an old diary; a shabby book that reflects a threadbare me, depleted by gravity and, I hope, now hardly recognisable.

Things fall apart, but we reflect, re-examine and reconsider the necessary grieving process that we go though, which tends to accompany any significant loss or separation, and perhaps might feel a cathartic lightness in the sharing.

As you can see, these are nudes; but here, nudity is not used as a means to celebrate beauty or sensuality. Instead, it is used to express extreme vulnerability, pain, sorrow, personal loss, and the feeling of helplessness and despair.

Even by themselves, without the titles, the photographs are hard-hitting. The use of extreme contrast obliterates all detail that would detract from the emotions conveyed by the poses and the monochromatic nature of the images. Dense, black shadows hide the photographer / sitter / subject / model’s eyes, allowing us only to guess – no, know, even if we had ignored the artist’s statement – that these eyes are drowning in tears and are hidden from us as her last defence, a last, vain attempt to prevent herself from being seen as completely lost and defeated. Paired with their titles, which are lyrics chosen from the original French and the English adaptation of the song, the images reveal their true context, their origin and their story.

In all, this is a very powerful exhibit, which, despite being her debut, showcases Becky’s technical prowess at using tones and shapes to send her message to the viewer, her boldness at sharing her naked soul with us, and her sensitivity as a person and an artist who can masterfully switch from a grand epic like Paradise Lost to something far smaller, extremely personal and intimate. Very highly recommended.

Today was the third time I visited ALEGRIA Studio‘s dream-like and captivating exhibit “The Sea of Cubic Dreams” at LEA25 with the intention to take photos and write about it. The impetus for this came from the snapshots my friend Trinity Yazimoto shared on her SL feed, and from Honour McMillan’s recent post. I still have no information on their upcoming “Theater Night’s Dream” project, so I suppose they’re still working on it.

The great blood red Dream Mask at the Sea of Cubic Dreams. Please click on the image for a larger version. The full-size version can be found here.

There have been changes, though. In previous incarnations (photos and coverage of which you can see on my blog and on my Flickr photostream), the Sea of Cubic Dreams was bathed in colours of blue and turquoise, immersed in a bright-shining night that made it a serene place to wander in. Now, the dominant colour is blood red; I’m not sure if there’s a symbolism behind it. Also, several additions have been made. But I suppose I’d better let the pictures speak for themselves.

The Sea of Cubic Dreams. Please click on the image for a larger version. The full-size version can be found here.

It’s still a gorgeous exhibit, which I highly recommend to anyone. As I had already written, there’s a fun little interactive element. I’m looking forward to seeing what else the ALEGRIA Studio’s people will come up with as they keep working on it, and I can only encourage you to watch this space. Also, do have a look at their SL Marketplace store, because they also make some very interesting fashion accessories.

On the 3rd of September at the Rift Horizon Gallery, an exhibit by Chance Acoustic (aka Cath Cole) titled A Room for Ferrisquito opened. This exhibit focuses on famed virtual artist Bryn Oh’s early work, i.e. the period from 2008 to 2011. For the opening, artist Art Blue gave a special 20-minute presentation titled Knowing, which he described as “a one-man theatrical performance”. The room containing the exhibited artwork is also part of the “VULCANICUS” time capsule in OpenSim.

END_OF_DOCUMENT_TOKEN_TO_BE_REPLACED

The Sea of Cubic Dreams. Please click on the image for larger version.

No, nothing’s changed since my first visit to ALEGRIA Studio‘s beautiful exhibit “The Sea of Cubic Dreams” at LEA25. Their upcoming “Theater Night’s Dream” project is, as far as I can tell, still work-in-progress – so, this preview should suffice for now. If you want to learn more about it, read my previous article on it, or Inara Pey and Ziki Questi‘s posts.

I have to admit I’ve always been a hesitant traveller in Second Life, not least because I’ve never had a really decent computer that would enable me to enjoy SL’s full potential; in fact, even merely moving around has been a chore for me when exploring richly-decorated and/or crowded regions. I think you can easily guess that trying to take snapshots that could hold a candle to those gorgeous in-world photographs from various well-known in-world travelogue blogs (like Ziki Questi’s, or Honour McMillan’s, or Quan Lavender’s, or Inara Pey’s, or Loverdag’s) was completely out of my reach. It was only fairly recently (two years ago, actually) that I started exploring more of SL – and, by exploring, I don’t mean the typical, cookie-cutter club/mall fare.

Even so, few in-world builds have managed to keep me interested in them. Of the places I’ve visited, only a few have I bothered to visit again, and even fewer are my “regular haunts”. Now, while The Sea of Cubic Dreams certainly can’t become a “regular haunt” for me, because it will only be here for a few months, it’s a magnificent installation. In fact, I’ve liked it so much that, over the course of a single week, I’ve visited it three times already. 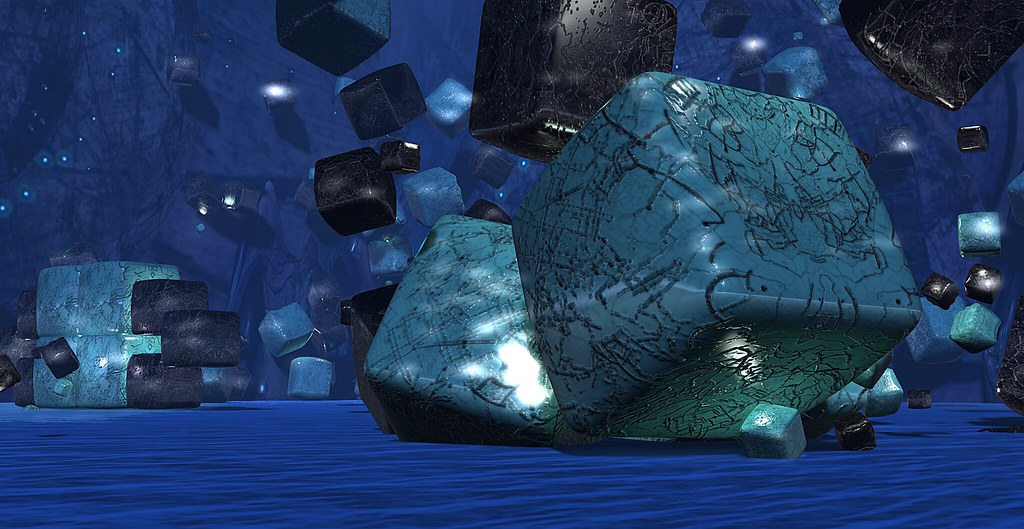 Also, for someone with my tastes, it’s a shutterbug’s heaven. The colour scheme, the region windlight, the texturing, the arrangements of the cubes all across the region, they all conspired to make me want to come back, fool around with the cubes, and take more photographs each time. There have been only a few times so far that I’ve enjoyed snapping away so much.