The Basilique, 29 October 2014. Click on any image to open it in its full-size version on Flickr (they all open in a new tab).

Another historical region on the Second Life grid is going to close its doors, and I am especially saddened to hear that this particular sim is closing. On her blog, Canary “Becky” Beck announced yesterday that her region, the Basilique (Isoloto di Garda) will close on the 30th of September, unless someone steps in by the 23rd to take over the region to keep it alive; if this happens, not only the region, but also the use of all public buildings and furnishings will be transferred.

END_OF_DOCUMENT_TOKEN_TO_BE_REPLACED

Last Friday, I was invited to preview Canary “Becky” Beck’s exhibition of self-portraits titled Ne Me Quitte Pas, which opens on Thursday, November 20th, 2014 at 12PM SLT and will be hosted in the attic space of the Arts & Culture Community (A&CC) until January 10th, 2015. To get to the exhibit, you will need to enter the gallery after you arrive and go all the way upstairs.

Canary Beck is no stranger to the artistic circles of Second Life, most notably because of her activity with the Basilique Performing Arts Company and their (until now) magnum opus, Paradise Lost in Second Life. This time, she debuts as an in-world photographer, with a collection of twenty intimate and very powerful self-portraits tied to lyrics from Jacques Brel’s 1959 hit Ne Me Quitte Pas (Do Not Leave Me), which has been covered numerous times in various languages; English speakers are likely to be more familiar with its adaptation titled If You Go Away, with lyrics by Rod McKuen; personally, I find the English lyrics lack the emotional impact of Brel’s poetry, which I can only describe as an exercise in despair.

At this point, it would be best to let Becky’s words describe the exhibit:

In this series of pictures called “Ne Me Quitte Pas”, I have aimed to express what I am only now able to express coherently in words. I’ve even lifted the titles for the pictures from the verses of Jacques Brel’s plaintive poetry set to music, feeling unable to write them myself.

These very personal pictures are the result of two months of taking hundreds of similar pictures on my bare white platform – most of which I obliterated soon after I took them. I never planned to share them. As I’ve reviewed these works for showing; however, I see them now like heavy pages in an old diary; a shabby book that reflects a threadbare me, depleted by gravity and, I hope, now hardly recognisable.

Things fall apart, but we reflect, re-examine and reconsider the necessary grieving process that we go though, which tends to accompany any significant loss or separation, and perhaps might feel a cathartic lightness in the sharing.

As you can see, these are nudes; but here, nudity is not used as a means to celebrate beauty or sensuality. Instead, it is used to express extreme vulnerability, pain, sorrow, personal loss, and the feeling of helplessness and despair.

Even by themselves, without the titles, the photographs are hard-hitting. The use of extreme contrast obliterates all detail that would detract from the emotions conveyed by the poses and the monochromatic nature of the images. Dense, black shadows hide the photographer / sitter / subject / model’s eyes, allowing us only to guess – no, know, even if we had ignored the artist’s statement – that these eyes are drowning in tears and are hidden from us as her last defence, a last, vain attempt to prevent herself from being seen as completely lost and defeated. Paired with their titles, which are lyrics chosen from the original French and the English adaptation of the song, the images reveal their true context, their origin and their story.

In all, this is a very powerful exhibit, which, despite being her debut, showcases Becky’s technical prowess at using tones and shapes to send her message to the viewer, her boldness at sharing her naked soul with us, and her sensitivity as a person and an artist who can masterfully switch from a grand epic like Paradise Lost to something far smaller, extremely personal and intimate. Very highly recommended.

END_OF_DOCUMENT_TOKEN_TO_BE_REPLACED 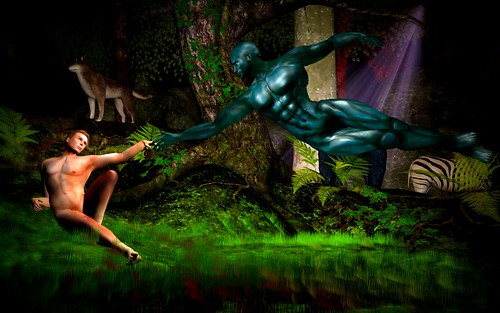